Eclipse Metals Ltd holds 31sqkm of manganese exploration terrain in south-eastern Queensland, in the Mary Valley district about 16km to the southwest of the regional centre of Gympie. The granted tenements lie partly within the Amamoor State Forest, which has been largely invaded by exotic weeds and undergrowth and large sections have been cleared and replaced with plantations of hoop pine. Access to site is via local sealed roads thence to drill locations via existing forestry tracks. 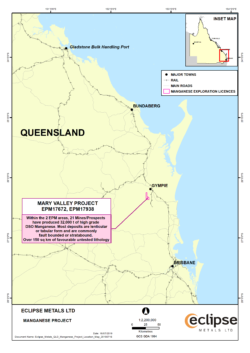 A total of 31,477 tonnes of manganese ore has been mined from within the Mary Valley tenements, with manganese grades ranging from 42% to 51% Mn. Limits of the deposit have not been defined either along strike or at depth.

Historical assays have also indicated that the Mn, Fe, Si and P levels are all within direct shipping ore parameters which further confirm the economic potential for stand-alone mining operations within the Mary Valley manganese area. 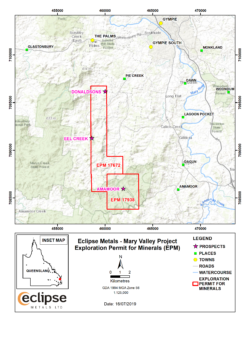 Early in 2018, eight reconnaissance diamond cored holes were drilled in the Amamoor prospect to test areas of historical mining and to evaluate anomalous areas defined by a detailed gravity survey. (refer Figure 10)

Interpretation of these results and gravity survey data highlight the open nature of the high-grade mineralisation, and that multiple lodes exist in close proximity in at least one area at Amamoor, where the mineralisation presents as steeply-dipping, lenticular-shaped fault-controlled zones (refer cross-section Figure 11).

Angled hole ADD002B, sited toward the southwestern end of the prospect in an area of elevated gravity values intersected 10.6m of manganese mineralisation with an average grade of 7.0% MnO from 2m depth, dipping flatly at 15° to the east, in line with the company’s geological expectation for that area. While this intersection was of lower grade, the company will investigate the opportunity to identify higher grade mineralisation in the vicinity. The company believes that this intersection, together with occurrence of float and sub-outcropping manganese mineralisation over a wide area to the west and south-west of historical workings, strongly supports the potential for substantial extensions of mineralisation in the southern area at Amamoor. 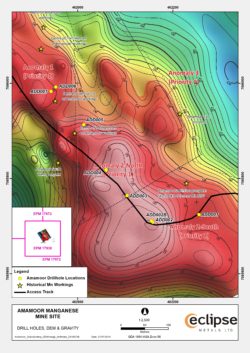 Holes ADD006 and ADD007, drilled to target depth extensions in an historically mined area, intersected layered-to-massive manganese mineralisation over much of their length.

These intersections, along with surface evidence of interpreted mineralisation, indicate the potential for mineable widths of both low-grade mineralisation which may be beneficiated, and high-grade DSO manganese mineralisation previously identified in the project area. 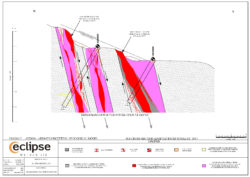 A summary of manganese production near the Mary Valley Project is shown below, where Amamoor No.1 produced 19,630t @ 51% Mn